Deprecated function: The each() function is deprecated. This message will be suppressed on further calls in menu_set_active_trail() (line 2405 of /home/rabbit/public_html/includes/menu.inc). 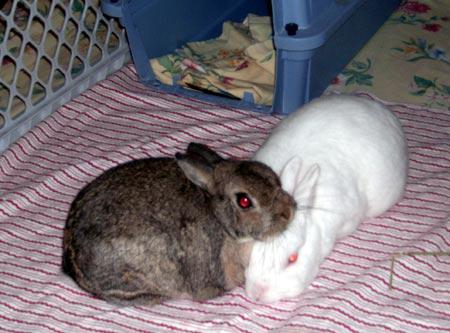 Hoshi was rescued from the euthanasia room, very independent, would grunt, charge & bite, until she was spayed. She became the most loveable bun, bonding with her humans. But became a little lonely for her own kind. She didn't like anyone introduced to her until she met Pixel (the tiny white bun) and for him it was love at first sight. She wasn't having any part of him so we separated them. Then Hoshi realized what she was missing; they've been together ever since.
Together, they weigh about 4 pounds!