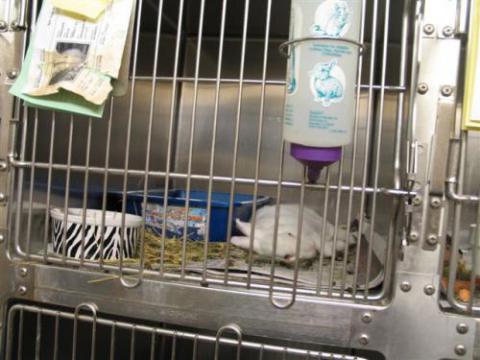 This depressed, sad bunny lay motionless in the shelter cage. At first glance we were not sure he was even alive. When we opened his door he barely moved. Sometimes rabbits will decide to just give up like this one.

This solitary, very sad white bunny looked at me with a dull expression, then closed his eyes. He raised his head slightly and put it down once again as if to sleep. He lay there in the cold metal cage on dirty newspaper amidst his own droppings, seeming oblivious to his surroundings. As I stroked his head his eyes opened once again and energy seemed to return. He sat up, then I picked him up to hold him. He was so sweet and loving. He placed his head under my chin and looked into my face. He was so lonely, alone, and felt so sad! Apparently he had been dumped at the shelter with a large number of other rabbits one evening - just one of so many thrown at the shelter each evening. .

The only information on his card was "found Stray". This is the statement most often made by those people who do not care - the statement made by those who likely bought this little bunny as a cute baby at four weeks from some pet store or breeder so the kids would have an amusement. Now that he grew up - they discarded him. What a heartless thing to do.

I have learned that there are so many people who lack the compassion needed to have an animal companion. Some people really do just get a rabbit as a child's toy, then stick it outside in a hutch and throw it out when they are finished with the amusement. This is animal abuse and it is wrong! Imagine what this teaches the child too. Get an animal, dump it, get another. What a terrible lesson to show a child.

This sad bunny reminded me of all that and more. It seemed as if his spirit was broken. I asked that his picture be taken and shown as he was to let people know what they are doing when they dump at shelters. I wish I could show the public the rest of the hundreds of beautiful animals who are humanely euthanized every day, but I think this would be too traumatic and I worry about the eyes of the very young and those sensitive souls among us who may never be able to forget the images. This pictures speaks volumes.

Rabbits are thrown at shelters ever day, every hour - It is endless! The shelter cannot keep up! Rescues cannot keep up. It is the people buying these rabbits who need to wake up and stop ! If you have a bunny and you are even considering rehoming your bunny, learn what to do - do not just dump your sweet animal friend. It is cruel.

Sioux (a Haven volunteer) and I were at the shelter to pick up six rescued rabbits when we noticed the very sad bunny laying motionless on his side. I nick named him Sunny to give him hope! I promised him that I would come back for him, and the following night, late in the evening I came in to rescue him and two other lucky bunnies. The night before I had a surprise call from one of our volunteers who saw my appeal regarding Sunny and just decided then and there he was going to help this rabbit and adopt him.

When I arrived at the shelter Sunny seemed very surprised to see me - Who knows, maybe all the other bunnies had told him the horrors that may face him???? I don't know. His name was on the euthanasia list - We packed him up in a comfy carrier and we were off - there he was in the back seat strapped in safely with the other rescues for the night. The ride home was quick and soon I was able to hold him and let him know that he was safe. He seemed surprised, naturally cautious, but very alert! "Where am I?" he seemed to say.

He was placed in his nice clean big space with soft blankets and a fresh litter box with lovely hay. He received fresh food, water and and a plate of fresh greens. He didn't move at first - I held out a piece of veggie to him and he lit up with happiness. He ran over and took the food from me looking at me all the time. I stroked his head a bit and that seemed to settle him down, and he started relaxing quite a bit. Then he just focused on his food. When he had eaten, he began to gingerly explore his room. "What is this? what is that?" he seemed to say - the toy was a big surprise. He drank lots of water and this time sat down and just looked around. He no longer looked sad. He liked his stuffed bunny too. He dragged that about his room a bit.

I let him be for a bit and then the next time I came to his cage he came up to greet me. This time I got a kiss on my hand. Awww that was sweet! Sunny was relaxed and seemed to be settling in very well. He was indeed one happy boy. What a wonderful change in just a few short hours. From misery to loving comfort.

The next day he was able to play and then, like magic, a volunteer who had seen his picture made the big decision to welcome him to his bunny family. The volunteer came to pick Sunny up and take him home. Oh happy day!

Sunny who had been so sad and on the verge of giving up, was rescued then adopted - all within two days! It was a magical experience. His new home is lovely and warm. His new father is loving and kind.

YOU CAN HELP. Think of the difference one person made in Sunny's life. Please consider fostering for the Haven or adopting! Help us make a difference. You can truly help! Just call 831 239-7119

Here is an update on Biscotti from his new home:

After my introduction to Sad Boy while I viewed his pictures on your computer, I was certain that I was going to bring this boy home with me. I was set. I was determined to give him the love and support he needed to help him feel happiness. I made the perfect decision! He is wonderful.

After I came to pick him up from your rescue site, he and I made the drive to "our" house. He seemed to understand immediately upon our introduction that we would be spending a lot of time together in the future. If a bunny could smile, he was doing it!

It was my hope that he would eventually be a free range house rabbit in my home, as part of a group of other rabbits who live there with me.. But first he needed to have some peace and time just for himself until he could have his vet check and become more comfortable in his new permanent environment.

His first living space in my home was the Leith pet condo. From his new condo, quite the improvement from his cold lonely shelter days, he could observe all of the other rabbits, as well as enjoy the freedom from the maddening noise that prevailed in the shelter where he had come from.

Those few things were a definate improvment in his once miserable life; but right away, the thing I could tell that made the largest difference to him was that now he had a human who cared for him. I know that sounds sappy, but it was true. I could really tell that the thing that made the biggest difference to him was that when he looked into my eyes, he saw in them someone who was going to care for him and always be there. He was loved!

After he had some time to settle in to the condo, I picked him up in my arms and held him against my chest while I stroked him , telling all about how great his life would be from this moment forward! Out of everything else that was happening, that seemed to be the most important thing for him at that moment. We stayed like that for a while, and then I slowly walked with him in my arms out to the small back patio enclosure that exists where we live. Slowly, while speaking to him, I put him down and offered him the freedom to move as he pleased (perhaps for the first time in his life). He looked up at me, and in his eyes I could see the confidence that showed that he knew I was going to stay there with him. Gradually he began to explore the patio area, as far as the six foot wooden fence that surrounded it would allow. Then he came back to me and he did the first binkie that I think he had ever done in his life. It was truly a great feeling for me to watch him do it.

Now, after some time has passed, he is well aware of the other rabbits who live at home with him, but the thing that I am most aware of is how he greets me every time I retrurn home to where we live. He comes up to the end of the Leith condo that is closest to the front door of the house and he puts his paws up on the screen as if to say "welcome home Dad ". Not all rabbits will do that to their human, but all rabbits have some way in which they will let you know how much they appreciate your kindness towards them.

I am so pleased I happened to see his photo taken by your astute photographer! I could feel his intense need looking at him laying in such misery. Thank you for allowing him to join our family. I have renamed him Biscotti, because he is so sweet. I love every minute I have with him. I think he's a pretty happy boy now . Hopefully, his sad days are only a distant memory. Biscotti brings such powerful joy to my life.