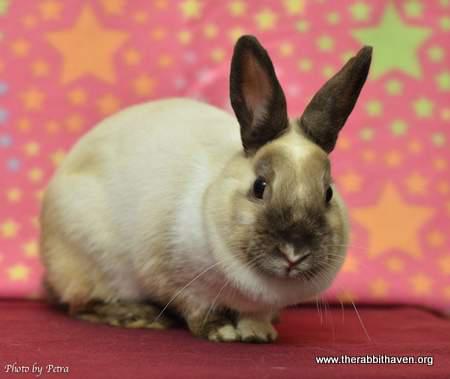 Being a foster family for a homeless rabbit can be very gratifying. Some rabbits have a lasting effect on both their foster family and their new forever home. One such bunny is Cocoa. Here is her story, first from the perspective of her foster family, and then from the perspective of her adoptive family. Foster homes are the backbone of The Rabbit Haven's network, we cannot save rabbits without the love and support of our foster families. Please contact us today at director@therabbithaven.org if you want to find out more about being a Rabbit Haven Foster site.

Cocoa, the Tasmanian Devil of Rabbits

When Cocoa first came to my house, she had just been spayed by Rabbit Haven and recovered in a medical foster. The Haven had pulled her from the shelter where she was to be euthanized after her owners surrendered her for being aggressive.

Bossy and cage protective, she would charge out of her hut grunting and boxing, then attack one of her toys when I pulled my hand back. I would brave the fury and scoop her up. Once secured under my chin, she would settle for a while, then nip me gently when she wanted down. We learned together that she would not hurt me and I didn't need to flinch, she could come out like the Tasmanian Devil of Rabbits and I would trust her.

Her favorite toy was a phone book. She would dig and rip and push the bits around for hours. Picking up the stray phone book pieces became a daily task. While I was traveling, she spent a week at the Bun Zen Center in Santa Cruz where She went through half a phone book!

Cocoa was adopted in a private meeting. Her new person chose her carefully. A month later I saw that Cocoa had been adopted again. I learned that she had been returned after eating the wallpaper in her new home and adopted immediately to be bonded to another rabbit. After another month Auntie Heather contacted me: Would I foster Cocoa again? She needed some time in a familiar place after her two failures. Yes, I would.

She came back to her spot and a fresh phone book. Two weeks passed before her depression lifted and she began destroying the phone book, then I knew she was OK. At adoption fairs, she would terrorize Haven staff with her grunting and boxing. Auntie asked me to accompany her and talk to potential adopters. Each time I had to tell someone that Cocoa, my little Tasmanian Devil, was the wrong rabbit for them, I wondered if I was cut out for this.

And then, while at a fair, Ray got a call. Susan had been there earlier, just to say 'Hi.' Was the grunting boxing bossy girl rabbit still there, she asked? She had decided that she had to adopt Cocoa for the very reasons Cocoa was not suitable for anybody else. It was the last adoption of the day, and it was a perfect match.

It all began when we brought our foster rabbits, Shu & Mochi, for nail trimming & pictures. While waiting, we saw Cocoa. She caught my attention because Cocoa was kind of aggressive when I tried to pet her. It reminded me a lot of my bunny, Chico. He passed away two months ago. The fear of loss again, made me ignore Cocoa. We went straight home after everything was done with my foster rabbits. Fortunately the thought of Cocoa's personality kept bothering me and it brought me back to the adoption show by the end of the day. I was so happy to see Cocoa was still there. I knew without a doubt that Cocoa was mine. We were so excited to bring Cocoa home. The story about Cocoa touched my heart. On the first day Cocoa was home, I cried when I pet her and told her that I'll never ever surrender her. I love her dearly. I still tell her whenever I'm with her.

Cocoa is a very special bunny; she is sweet and so cute. We all love her so much; she has a lot of special names. My husband calls her Cocoa Puff, my daughter calls her Pillow Pet, I call her Cocoa Bun. We still working on her, assure her that she is safe and loved now. She is getting way better. Cocoa always comes to my lap when I hand feed her favorite snack, pumpkin seeds. Cocoa likes to eat cilantro, parsley, dandelion, rose petals & banana. She loves being petted, always gives her head to be petted when we slowly approach her, then she would become flat like a pancake. Cocoa's favorite spots are in front of the TV in our family room and on the bricks by fireplace.

We feel so blessed to have her. Cocoa has been helping me cope with the loss of my Chico. The memories of Chico bring smiles instead of tears because of her. I thank Rabbit Haven for finding us our lost puzzle pieces; my family is now complete again! God bless all bunnies!