Cosmo & Cielo - A match made at The Haven 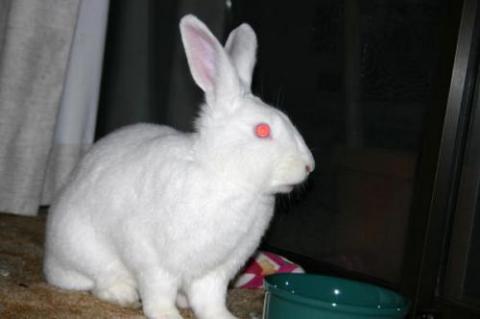 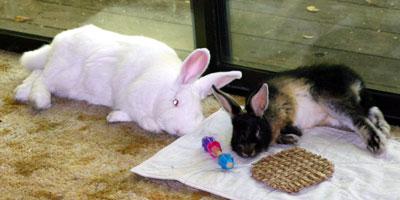 It's only very recently that I've reentered the world of House Rabbits. My last house rabbit was back when I was in college. The information available on rabbit care back then was minimal, and to this day I feel like I failed my big white New Zealand bunny buddy. In April of this year, 2004, while shopping at our local Petsmart for food and general supplies for our already large animal family, we noticed while in the checkout line, a woman being photographed holding a large white rabbit, thinking that it was some sort of Easter promotion we wandered over to see that it was instead a rabbit rescue organization adopting out adult rabbits. They explained that they were trying to make room for the flood of unwanted rabbits they would soon be receiving - unwanted Easter rabbits. I walked around talking to and petting the rabbits, soon my partner joined me. I came to a large white rabbit that looked just like the one I had in college (uh oh, first big danger sign), My partner was asking all sorts of questions about rabbits and I told him that I had one in college that looked "just like this one"... at that moment the rabbit stood up on his hind legs and reached out to me. I was told by a volunteer that he wanted me to pick him up; I however, was reluctant and moved on to look at some baby bunnies. Much to my dismay, she picked up the white rabbit and put him in my arms. "Uh-oh, I'm in big trouble now", I thought to myself. She proceeded to tell me his sad story and how one shelter had nearly euthanized him for being "aggressive". You would be too if you had been locked in a 2' x 2' wire cage for months. She explained that they needed to find him a home quickly because he had been hanging out in the cat room of the Watsonville shelter where he had been relocated. That shelter would soon need the space for kitten season....all the while this big white bun was snuggled happily in my arms nibbling at my shirt and nudging me with his rapidly twitching nose.., then my partner said, "why don't we just bring him home.." and so our house rabbit adventures began.

After filling out the paper work and shopping for the necessary supplies we were ready to take our new friend home. "Auntie" Heather, the director of Rabbit Haven of Santa Cruz, suggested that we might want to consider finding a companion for our new friend, thereby planting the seed. It wasn't long before we realized that "Cosmo", would be happier with a bunny friend. So we took Cosmo back to another Rabbit Haven adoption day for some "hot dates" with potential girlfriends. He found several potential girlfriends, but seemed most at ease with a young Silver Martin Rex mix girl. We let them hang out together for a while and then took them on a tour of Petsmart in a shopping basket. "Good for bonding", Heather said. They settled down in the basket next to each other and snuggled. Too cute! She was destined to come home with us.

We named Cosmo's new girlfriend, Cielo. Cielo needed to be spayed. When she was healed from her surgery and after several supervised visits in neutral territory for the bunnies at home, they were ready to settle down together and set up house. They now share our bedroom by day and their precision pen sleeping quarters by night. They are inseparable, and so affectionate and sweet to each other that it warms are hearts to see them together. Thank you Auntie Heather for a match made at The Haven!