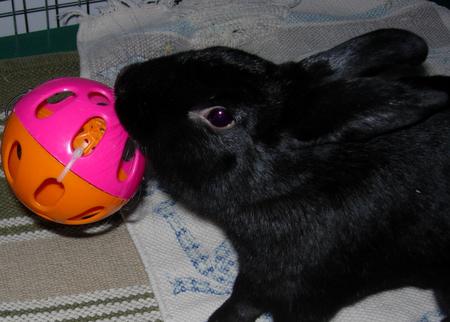 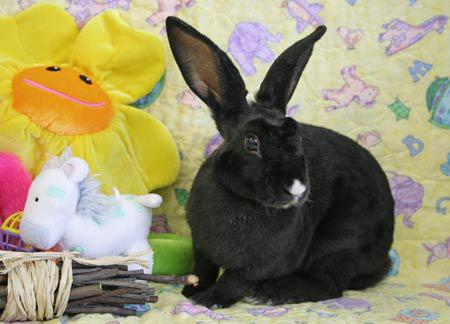 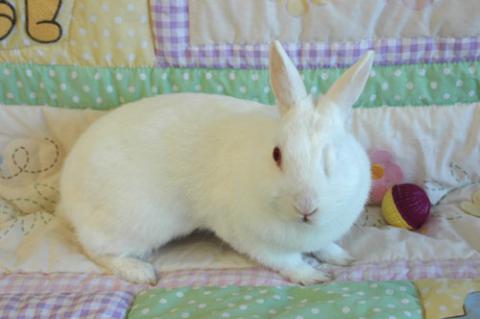 Our family had been considering a pet rabbit for about a year, when we got the chance to pet sit for a bunny while his family was away. We all enjoyed having him, so I started the process of investigating how to get our own bunny. I assumed that we would buy a rabbit from a breeder, so I went to google and did a search for "bay area rabbits". The third or fourth item on the list was a rescue organization in Santa Cruz named The Rabbit Haven. From their website, I learned about the problems of rabbit overpopulation in the Bay Area, and how there were many rabbits in shelters waiting for a chance to find their "forever homes". I sent email to the director of Rabbit Haven, and Heather Bechtel sent me back a long and thoughtful reply, telling me what was involved with the adoption process, suggesting what kind of rabbit might be good for our family, and inviting us to go to a rabbit adoption show that weekend.

We all piled in the car and drove to the PetsMart in Santa Cruz, expecting to find out more about rabbits and to maybe play with a few bunnies. After meeting Heather, we walked through the pens and came upon this little black bunny named DJ who was busy fighting with his litter box, trying to move it to a different spot in the pen. He was so determined to move it, that we stayed a few minutes just to watch him and enjoy his antics. One of the Rabbit Haven counselors asked if we wanted to play with DJ, and we said sure, so they set us up in a pen with DJ that was large enough for my two daughters and me to sit in and let DJ meet us. He totally charmed us. We spent several hours with him, while patient counselors explained to us what his body language was saying and giving us more information about rabbits and their care. Needless to say, later that afternoon DJ was on his way home with us. He had found his "forever home".

A few months later, when school started up again, we realized that DJ would be quite lonely at home all day with everyone out of the house. We decided to try to find a friend for DJ. We went back to PetsMart and met an adorable little girl bunny named Curly Sue. Curly Sue loves to be held, and really seemed to like us, so we decided to try to bond her with DJ. We brought DJ with us to the adoption show the next week, and slowly started the process of getting DJ and Curly Sue to know each other. Curly Sue's foster mom drove the two of them around in a shopping cart, and then transitioned us into a pen so that we could watch the two of them together. By the end of the afternoon they were sitting side by side, which the counselors all thought was a really good sign, so we brought Curly Sue home with us that evening.

We set her up in a small pen right next to DJ's big pen, so that they could see and smell each other. DJ's pen and play area is our family room, so we allowed DJ and Curly Sue to spend some time together in a hallway that DJ had not been in before. The bunnies would spend 20 to 30 minutes several times a day exploring this strange new place together. By the end of the third day, they were actively grooming each other, and were spending up to an hour together in the hallway, either alone, or playing with us together. Our next step was to let them out together in the family room, which is DJ's main play area. He chased her quite a bit, and we had to intervene occasionally, but they never fought, and they always spent time on the floor next to each other. On the fourth day, Curly Sue wandered into DJ's pen, and he did not get upset. He followed her in and began to groom her. They spent several hours together in his pen that day and the next, and on the sixth day, she moved in with him for good. I was in contact with Heather and several of the counselors during this period, and they were very supportive, giving me encouragement and advice to help the process.

A few months after we adopted Curly Sue, we provided a temporary foster home to two homeless bunnies. One of them was a tiny two pound dwarf girl named Deanna. Deanna had come to The Haven sick and injured, and had to have one of her eyes surgically removed because of a terrible infection. We fell in love with her, and decided to try to bond her into a trio with DJ and Curly Sue. We provided them lots of time together in neutral territory in our house, and Auntie Heather worked with them at an adoption show, taking them in a cart and observing them playing on the floor. After about 10 days of bonding, Deanna moved in with Curly Sue and DJ. The three of them now spend every moment of their lives together as best friends.

Our family now lives with three very special bunnies, and the folks at The Rabbit Haven have helped us each step of the way. We are lucky to have these guys living with us. 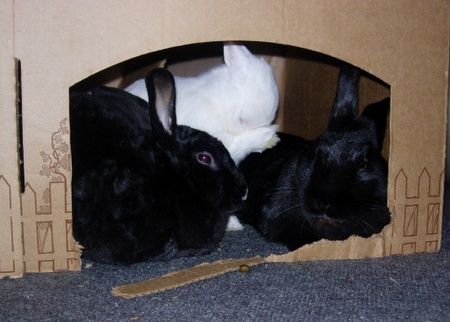 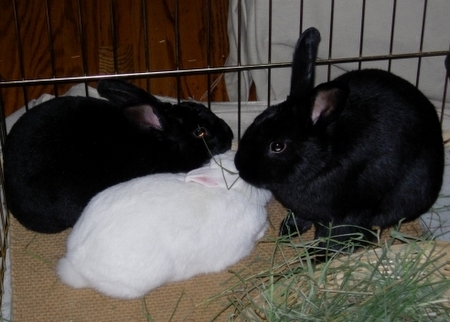