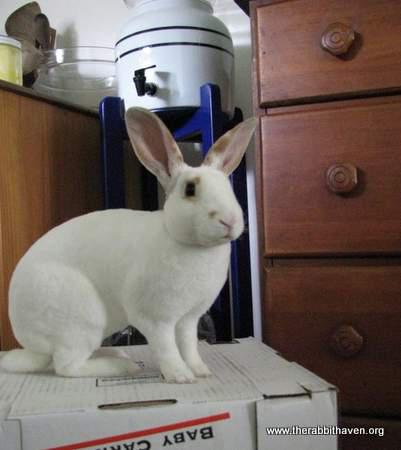 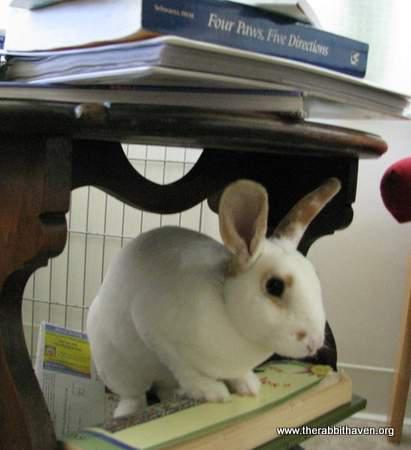 The little white Rex rabbit with golden ears was turned over to the Rabbit Haven by a man who said the rabbit had been stealing lettuce from the man’s garden. Oddly, he was given over to the Haven with a special towel and a name, Torrie; funny baggage for a freewheeling scoundrel. The bottom line was this rabbit needed to find a home where he would be loved. We re-named him Hermes, his gold ears looked like the wings on Hermes' helmet and his white slender athletic limbs lent him the air of a Greek statue.

His first adoption show was a disaster, he cowered in the corner the entire time. When one of the volunteers picked him up he freaked out. It was clear that socialization was needed. I moved him into the kitchen and picked him up and held him two or three times a day. Often we would watch Hell's Kitchen or Master Chef on my laptop, excellent for desensitization and I picked up some cooking tips. Hermes was consulted often on a variety of topics. Healthy treats and pets abounded. My son also took to picking up Hermes and sitting with him. Hermes knew his name and his nicknames; Little Guy, The Hermermermers. If he was in his box house, on hearing his name he shot out like a cartoon clock cuckoo. We loved him like family.

Unfortunate events plagued him at the adoption shows and he continued to be nervous. I took extra measures to keep him happy. Rather than accepting a ride for him with other bunnies, I brought him to the shows myself, and held him until he was relaxed. His pen was outfitted with his little mat from home. He responded well and his show demeanor improved. Still he was dogged by seemingly (note the use of the word seemingly) bad luck. Even if he was calm and beautiful, no one wanted a white rabbit or everyone was fixated on the showy rabbit next door.

Then from far away, all the way from Marin county, a Dutch female bunny came with her human. She was looking to replace her mate who had passed on to the Rainbow Bridge. At the adoption show her human brought her boy bunny after boy bunny, she rejected each one. Finally there was only one male rabbit left: Hermes. When Hermes saw her in all her black and white glory he immediately fell in love, she liked him too. He went home with her.

Recently I had the opportunity to speak with Hermes’ human dad. Hermes now sometimes called Potato, was doing great. He told me I should never worry about Hermes. He and his bunwife adore each other. They have their own room with houses, toys and tunnels. For sport they enjoy mugging their human for greens when he returns from the Farmer’s Market. Hermes is considered a very laid back yet loving and personable fellow; the perfect rabbit. And in a very happy home.