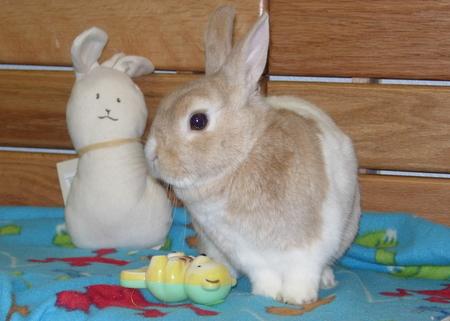 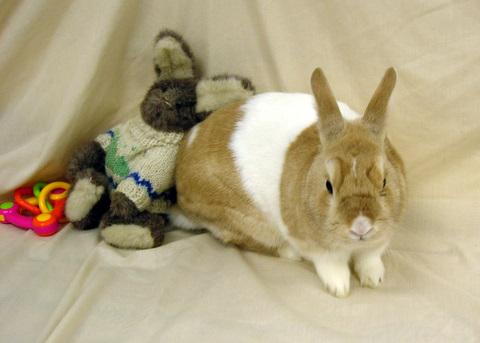 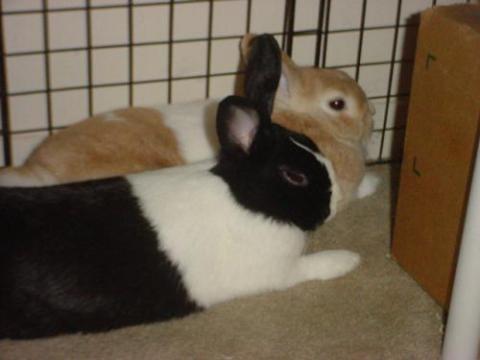 Hey there everyone! My name is Dono. Well it used to be Donahue, but my new human thinks Dono is cooler. Who am I to argue with the guy who gives me treats, eh?

I was brought back to The Rabbit Haven rescue group after my old owner had to move away for a new job. If this wasn't bad enough, my bonded friend went across the rainbow bridge just before I was turned back over. With this double whammy, it was no surprise to my foster mom, Linda, that I was a depressed. However, she was a lovely mom and got me back to eating and looking forward to finding me a new forever home with a new young lady bun to have as a friend.

That's when I met Maryann. Her human brought her all the way down from Richmond because he heard that there was a boy bun (ME!) who was looking for a new girlfriend. He also said that she was a terror towards all the other buns that he had tried to introduce her to so he wasn't sure what was going to happen. Well, when he put that lovely dutch lady into my pen, I was estatic. Oh, I could see her attitude behind those beautiful brown eyes, but I just laid on the ol' Dono charm and in no time, she was relaxed in the cage and letting me give her kisses! I was so happy I was binkieing around my X-pen and her human was so happy. So after saying goodbye to Auntie Heather and my foster mom, I headed back to Maryann's home.

Well, when we got there, she turned into a real meanie! She would bite me, pull out my fur and basically tell me to get the heck out of her house! I would run away, as any man would, but then would slowly come back towards her saying, "Hey! It's me. Dono. You liked me before. I'm sorry if I did anything to upset you but I'd like to still be friends." But she wasn't having any of that. She hated me. She thought I was trying to take away her human that she had been with for the last five years. I would never do such a thing! But you know dutch women.

Me and my new human had a little talk and we decided that we weren't going to let Maryann get away with this. We kept on trying to make her be nice to me but she kept on being very mean! He then took us to the bonding group nearby to help with things. It was a little calmer when we were away from Maryann's home but the moment we got back, she'd give me the stink eye and try to bite me whenever I came near. I was thumping mad!

He also took me and her back down to see Auntie Heather. We raced about the store and did cart rides, That was fun, then floor time. Heather thought of a new idea and she put a sweater on me and Maryann. Mine was to keep me from losing more fur and Maryann's to give her the sensation that she was being touched. Would it work? No, Mayann ate hers! Off with the sweaters. Also being the sneaky little terror that she was, Maryann would act really nice to me around Heather but would try to nip me when she wasn't looking. Well, more time was arranged and we were given side by side housing and plans were even underway for a trial separation (sigh) if need be.

My human and I spent 4 months trying to show Maryann what a great guy I was! I'd do binkies around her, give her kisses when I could get away with it and even let her have first bites of my favorite greens! My human tried treats, car rides, dryers - he even suspended the two of us in a carrier on bungee cords! But it just wasn't working. She became almost lazy in her attacks on me, not chasing me but if I 'happen' to be nearby she'd bite me.

Just when we thought all was lost, my human took both of us to a new place for rabbit "bonding". My human left us there for five days and let me tell you, they took no gruff from Maryann! Apparently Maryann had our human whipped, but they took my side and between the two of us, we finally showed Maryann what a great guy I am and how much fun we could have together. When our human came back, Maryann was giving me kisses. He actually began to cry. Hee hee.

We went back home with him, and although Maryann still will give me a nip if she thinks I'm getting a treat before her, she's a really great gal. We cuddle and kiss quite often, but like a healthy couple, we have our own hobbies and interests and often are off doing things by ourselves. But night time rolls around and we lie down next to each other for our sleeps and give each other kisses good night. Ahhhh, what a sweet life!

I am so happy with my new gal, and all the people that helped me along my way. I look forward to a nice long and happy life with my new girlfriend. Oh, and my new human too.

Submitted by:
Maryann and Dono's Dad